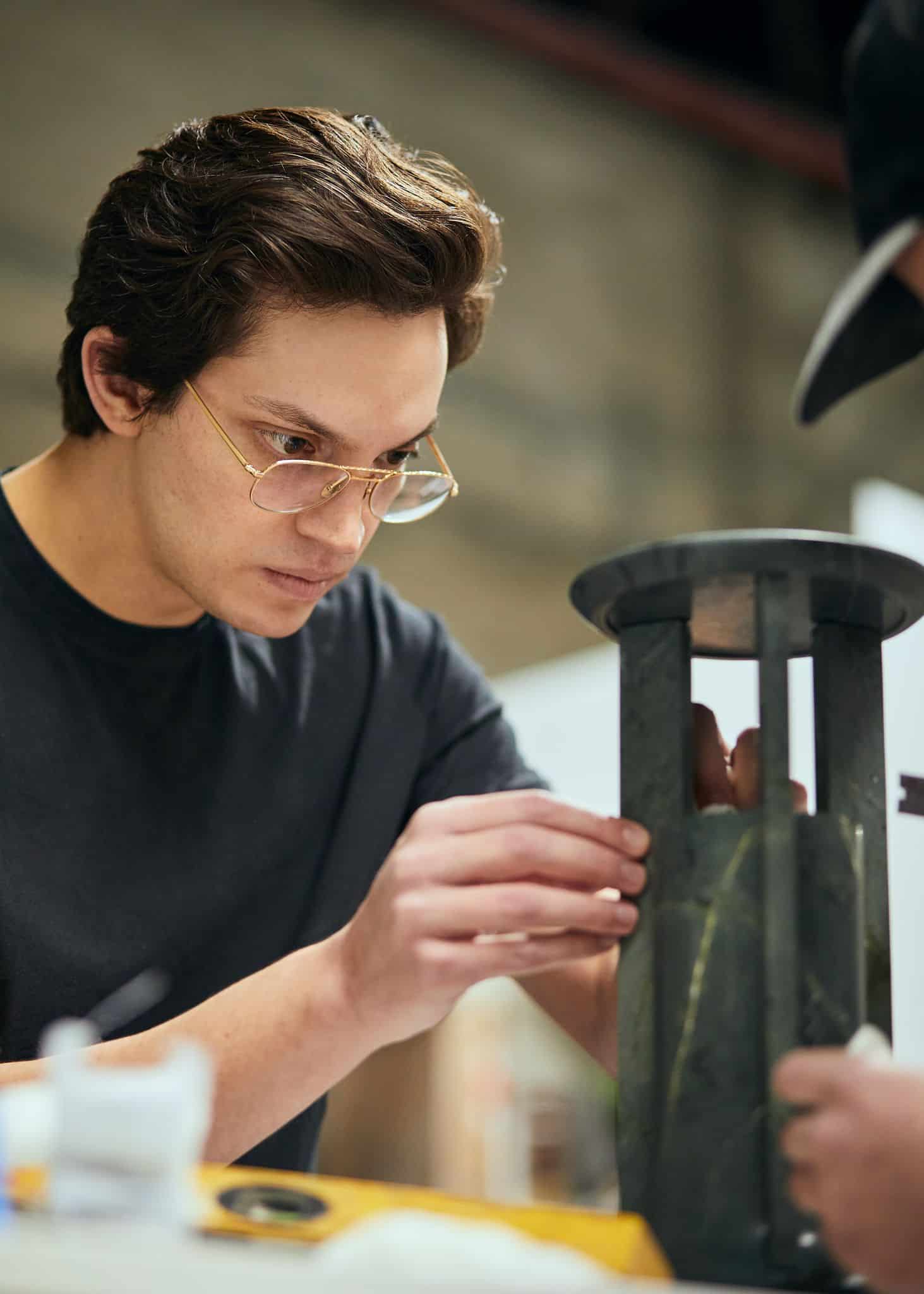 1. Where were you born and where are you from ?

I’ve lived in New York City for the past 15 years, but I was born in Washington D.C. and grew up in the state of Virginia. I identify with both places at this point in my life.

2. What is your first memory connected to the art world ?

I remember seeing the ballet, A Midsummer Night’s Dream, at about the age of 6. I was captivated by the ability to tell stories through movement. I remember sitting at my desk in my room following the performance and beginning to draw the sets, costumes, and lighting. Unknowingly at the time, I was trying to decipher and understand the euphoria I experienced during the performance. I wasn’t aware at the time, but that initial interaction with the performing arts made me feel empowered to express my emotions and self through varying artistic language.

3. Have you always worked in the art/design field ?

Shortly after seeing my first ballet performance, I began training as a ballet dancer. It wasn’t atypical, or dare I even say, encouraged endeavor by many academic teachers and grown-ups around me for a young boy, but my parents saw my passion and provided me with the opportunity. By the time I was 17, I had performed works with New York City Ballet and was living full time in New York City entering what I hoped would be a long career as a professional ballet dancer. I had begun performing more contemporary work with the New York Choreographic Institute when the 2007 financial crisis occurred in the United States. Funding for the performing arts dried up quickly and I made the decision to attend New York University to continue my academic education while the financial stability of performing arts institutions recovered. It felt foreign to enter a classroom setting after spending years training and rehearsing in dance studios and theatre stages for countless hours each day. It was an abrupt transition out of the world of the performing arts but in many ways, it forced me to find a passion for the art world I had lost somewhere over the years.

4. What led you to the design creation ?

My passion for ancient art began with the course Egyptian Art and Architecture by the professor Ann Macy Roth. I became fascinated with the ability for ancient art to provide an anthropological understanding of a culture’s belief systems, technical capabilities, social structures and daily life. This included high art that was undoubtedly beautiful but, more importantly, conveyed a message to its viewers as well as common artifacts whose form was derived purely from function and materiality. This interest led me to an entire academic study in ancient western civilizations’ art and architecture. It was through this study that I began to disassociate my understanding of time from the breath of a single life to something much greater. This understanding and connection to time lost has become the corner stone of my design creations.

5. How would you describe your creative process and it influences ?

I spend a great deal of time studying objects in museums and anthropological collections. I want to understand what made these objects useful at their time of creation but also what gives them artistic significance today. I look for ancient work with a nostalgic presence. Things that remain relevant and cherished even when the function or use has been outmoded or evolved.

I use this formal study to begin distilling ancient works into isolated details that occupy a liminal position between past and present. This ambiguity of time in the purest physical form is the trait I look for as I begin to develop work. Once I have arrived at form, I begin to consider materiality as an applied layer to either further modernize the work or tie it back to more ancient roots.

6. Could you describe a typical day of your work ?

7. Why did you choose the specific materials you work with ?

People frequently ask me why I choose to work in stone. It was never a choice for me – it is a material that has been a part of my understanding of permanence and time for as long as I can remember.

When I was younger, my father would take my brothers and me to sea cliffs and rock outcroppings along the East Coast of the United States to teach us about his work and the study of paleontology. We were searching for fossils at the time but the natural layering of earth over millions of years was a captivating concept of time that change my approach to the artwork I create. Stone is a material that existed long before any form of us. It’s that reverence and limited beauty that for me cements my work in no one time.

8. What are the technical particularities of your creations ?

9. What advices could you give to beginning artists who would like to create sculptural design works ?

Find your voice and the medium that speaks to you. We are so constantly inundated with design imagery these days that we can become numb to the artistic practices of production that feel truly unique and important to ourselves. My namesake collection released this past spring is the most important work I have produced to date. It was the first body of work I produced for myself derived from my own interests and intentions. This purity and autonomy in the creative process was freeing and reignited my passion to create.

10. If your works had to belong to a design movement, in which one would you define it ?

My work is inherently modern but rooted in ancient form and material.

11. What designers have influenced you ?

Arno Declerq is an artist I admire immensely. His formal understanding of East African ethnographic art and its influence on his own creative process I find similarities to in my own practice. His controlled use of a single material, iroko wood, in many of his worksshows his mastery of the material and developing form that feels not only authentic but connected to an unknown historic culture all at once.

12. What contemporary designers do you appreciate ?

13. What contemporary artists (in any kind of art) have you been inspired by ?

I believe it is my foundation in dance that leads me to return to movement and the performing arts when I am looking for inspiration in my practice. The work of the Israeli choreographer Ohad Naharin, the Czech dancer and choreographer Jiří Kylián, and the American choreographer William Forsythe are all cherished artists who inspire me. All one has to do is watch the opening sequence of La Petite Mort by Jiří Kylián choreographed at Netherlands Dans Theatre in 1991 to feel how captivated by emotion one can become when viewing live dance.

14. If you had to summarize your creations in one word or sentence, what would it be ?

Artifacts of an unknown reality.

Proust Questionnaire with very short answers (one or a few words) :
(The Proust Questionnaire is a set of questions answered by the French writer Marcel Proust. Other historical figures who have answered confession albums are Oscar Wilde, Karl Marx, Arthur Conan Doyle, Stéphane Mallarmé, Paul Cézanne…)

1. What is your idea of perfect happiness?

Being at peace with myself in the moment.

2. What is your greatest fear?

3. What is the trait you most deplore in yourself?

I can be quite shy. Sometimes I feel my apprehension to try new things gets in the way of living my life.

4. What is the trait you most deplore in others?

5. Which living person do you most admire?

My husband. He’s the kindest person I’ve ever met.

6. What is your greatest extravagance?

7. What is your current state of mind?

8. What do you consider the most overrated virtue?

9. What is the quality you most like in a person ?

10. What is the quality you most like in a person?

11. Which words or phrases do you most overuse?

I’d love to be able to work with precious metals and rare stones as a jeweler. It’s a trade that takes a lifetime to learn and requires immense precision and detail in objects of the smallest scale. I know it’s a trade I could get passionately lost in given the opportunity to learn.

13. If you could change one thing about yourself, what would it be?

14. What do you consider your greatest achievement?

Trusting myself to begin my own collection of work.

15. If you were to die and come back as a person or a thing, what would it be?

Something that can fly. I’d want to experience the world from a new perspective.

Many places in Italy but Ravello for certain. I’ve never felt more at peace than the time I spent there.

17. What is your most treasured possession?

An ancient Roman sestertius from the reign of Hadrian that my husband purchased for me on a trip we took shortly after our wedding.

18. What do you regard as the lowest depth of misery?

19. What is your favorite occupation?

20. What is your most marked characteristic?

21. What do you most value in your friends?

Honesty and a space free of judgement.

22. Who are your favorite writers?

Juhani Pallasmaa, Sherry Turkle and Peter Zumthor for their writings on objects and space which have helped me immensely in my practice.

Madeline Miller’s portrayal of the Greek mythological figure Circe in her book by the same name.

24. Which historical figure do you most identify with?

I’m not sure I identify with him, but I’d love to sit down with Antinous of Bithynia and hear his side of the story.

25. Who are your heroes in real life?

Everyone who chooses compassion over ignorance.

26. What are your favorite names?

Thisbe is my favorite name. I first heard the name in A Midsummer Night’s Dream where a group of actors perform the play-within-a-play Pyramus and Thisbe. The story comes from Book IV of Ovid’s Metamorphoses and forms much of the framework for the well-known story Romeo and Juliet. I loved the name so much, I ended up naming our dog Thisbe and so that name ultimately became a part of our family.

27. What is it that you most dislike?

Individuals with no regard for the importance of history or preservation.

28. What is your greatest regret?

My inability to speak French and Italian. Almost daily I have the need to read, write, or speak these languages and am unable.

After a long and fulfilling life.

The only certainty is that nothing is certain. – Pliny the Elder, Naturalis Historia Vol. Vi Cb